Surya aged 12 years was brought to CGC two years back by his mother. His mother had read an article in the news paper about children from CGC passing A.P. Open School 7th standard exam. She came to the school with the major complaints as follows:

Does not mix with children. Prefers to be alone. Drools while sleeping. Makes sounds.

The personal history reveals that nothing significant was reported during the prenatal period. Surya was born of a full term forceps delivery at the hospital. His birth cry was delayed for 2 minutes. He had physiological jaundice after birth. His motor milestones were normal however his speech was reported to be delayed. His problem was recognized at the age of 4 years when it was observed that he used to prefer to be alone and not mingle with children. He was diagnosed as having Autism with Mild level of Mental Retardation. He was suggested special schooling.

Management Plan at the school:

Initial level (at the time of joining):

Surya was almost independent in his self-help skills. He did not maintain eye-contact for more than 2-3 seconds. He never mingled with his classmates and was very shy and withdrawn. He used to write a few words in English but with spelling mistakes. He wrote numbers from 1 to 100 but never identified numerals correctly. He used to do single digit addition with slash marks.

At present he reads and writes functional words in Telugu and English. He reads and paragraphs in English. Makes a few sentences on a topic given on his own. In Telugu he is able to read lessons and answers simple questions, match the following and fill in the blanks based on the lesson. He mingles with a small group of children and cooperates in Group activities. He sings songs. He is able to do basic mathematical operations. He does simple word problems in Maths. He prepares a bill as a part of shopping skill. He is able to weigh objects with 1 kilogram. He identifies notes and coins within Rs 100. His is aware of combinations and transactions within Rs 5. He is able to read Telugu newspaper headlines and insists on explaining what he has read. He is writing the 6th standard A.P Open school exam during this academic year

He attends swimming classes (outside) and has learnt cycling, dance and skating. He is interested to drawing and music.

He has participated in the Science Exhibition conducted by COVA wherein he explained to the public about traffic signals, rules and regulations. 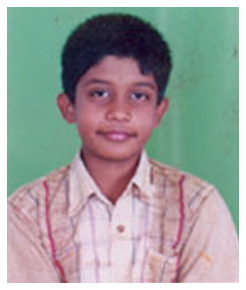